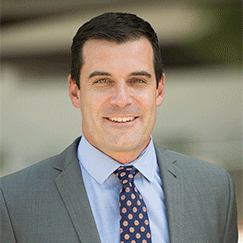 Dr. Amis is a board-certified, fellowship-trained orthopedic surgeon specializing in hand and shoulder surgery. He provides cutting edge skills and technology in the treatment of injuries and arthritis in all age groups and employs arthroscopic and minimally invasive surgical techniques.

Dr. Benjamin Amis sees patients at ATX Orthopedics in Austin, Texas. Dr. Amis is a board-certified fellowship-trained orthopedic surgeon specializing in hand and shoulder surgery. He provides cutting edge skills and technology in the treatment of injuries and arthritis in all age groups and employs arthroscopic and minimally invasive surgical techniques.

He was born and raised in Plano, Texas and is a graduate of Rice University in Houston. While at Rice, Dr. Amis played on the varsity football team and earned Special Teams Player of the Game honors versus the University of Michigan. He was also awarded the Frost Bank Freshman of Year honor – awarded annually to the freshman varsity football player with the highest GPA.

Dr. Amis obtained his medical degree from the University of Texas Southwestern Medical Center in Dallas and completed his orthopedic surgery residency at the University of Washington. His residency was an intensive trauma-based training program at Harborview Medical Center, one of the nation’s leading hospitals in orthopedic trauma care and the only level-1 trauma center serving the states of Washington, Wyoming, Alaska, Montana, and Idaho. He also received a national award as one of the “Best Teaching Residents of the Year” from the Journal of Orthopedic Trauma during his third year of residency.

Dr. Amis rounded out his training with an 18-month hand and shoulder fellowship with the CV Starr Hand Surgery Service in New York City. It is one of the oldest teaching hand fellowships in the country and is well known to musicians and actors. During his fellowship, he spent three months at the Melbourne Shoulder and Elbow Centre in Melbourne, Australia; three months at the Texas Scottish Rite Hospital For Children in Dallas, Texas; and completed the last year of his fellowship at St. Luke’s–Roosevelt Hospital Center in New York City.

Dr. Amis has authored articles in major orthopedic peer-reviewed journals and has written several book chapters in orthopedic surgery texts. An outstanding speaker and teacher, he has made multiple presentations at local, national, and international orthopaedic surgery conferences. Dr. Amis holds several professional memberships including the American Academy of Orthopedic Surgeons (AAOS) and is candidate member of both the American Society for Surgery of the Hand(ASSH) and American Association for Hand Surgery (AASH).