Tendon injuries and tendonitis can cause pain for many. At ATX Orthopedics, Dr. Benjamin Amis can help patients by providing different treatments and an accurate diagnosis of their particular condition. Patients throughout the Austin, Texas area can visit the office located in Central Austin. 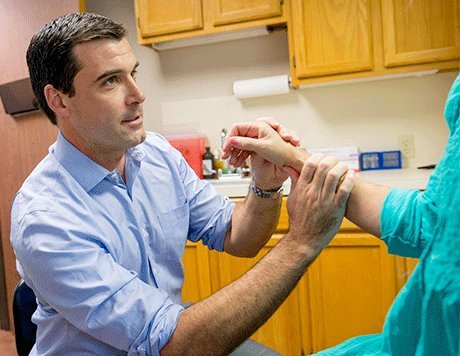 What is wrist tendonitis? What are tendon injuries?

Wrist tendonitis, medically known as tenosynovitis, is a common condition which causes irritation and swelling of the tendons surrounding the wrist joint. Many tendons surround the wrist joint and usually the ones affected are those which cross each other or pass over a bony prominence. Typically, only one is affected but it can affect multiple. A wrist tendon injury is a problem with the muscles and tendons in the wrist. Tendons and muscles in the wrist control movement in all directions. Tendons can be injured abruptly or they can be gradually progress. There can also be tiny or partial tears in the tendon. If patients suffer a complete tear of the tendon, it is known as a rupture.

How is the diagnosis of wrist tendonitis made?

Diagnosis is a made by checking the patient for the distinguishing signs of this condition. In addition, based on which of the wrist tendons is swollen, the doctor can perform a series of tests which stretch the area of concern to find the precise cause of the inflammation.

What are tendonitis treatment options?

A few different treatments can be beneficial:
Immobilization– Using a splint or a cast to hold the wrist in place is typically the first step. Wrist tendonitis is due to recurring aggravation of the tendon and the sheath. By resting the tendon, the swelling should go down.
Cortisone Injection– Cortisone is a very powerful anti-inflammatory treatment which is provided to patients using an injection placed directly into the area of inflammation. Cortisone injections are safe, but should not be used in excess.
Surgery– Surgery is only performed when the other forms of treatment have proven unsuccessful in solving the problem. If surgery is needed, the region of the tendon sheath which is tight and causing the painful symptoms and difficulty with tendon movements will be released. The swollen tissue can also be excised to create additional space allowing the tendon to move without obstruction.